Just released! Service or Servitude: A Study of Trafficking for Domestic Work in Australia by Heather Moore is the first report to analyse 30+ cases of domestic servitude in Australia. The report compiles new and existing information from a range of sources, including national and international data on domestic work and migration, current government statistics and personal accounts by individuals who have experienced domestic servitude Australia.

Domestic work by nature is hidden from view, which means that domestic workers are at risk of exploitation and servitude. The research findings are concerning. A number of women were deceptively recruited to work in Australia for what they thought were genuine jobs in domestic work. Some women thought they were marrying and moving to an exciting new country, only to find themselves trapped in domestic servitude.

Typically, domestic workers were forced to work excessive hours and were often subject to abuse. Escaping domestic servitude was hindered by their lack of English, fear of the police, confiscation of identity documents and violence or threats of violence.

Our next steps are to work with key stakeholders to plan how we as a community can prevent and respond to domestic servitude in Australia. 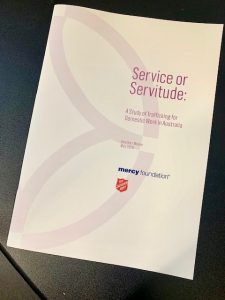 News & Events
Stay Connected with us