This award recognises Angela’s outstanding work, effort and commitment to upholding human rights and human dignity, from her early work with homeless women in Melbourne and her significant achievements in addressing gendered violence and human trafficking. This award acknowledges Angela’s pursuit of academic excellence, her life work in advocating for the rights of disadvantaged women and children and her significant contribution to addressing human trafficking.

Angela is the leader of Mercy Global Action at the UN, with special consultative status at the UN’s Economic and Social Council (ECOSOC). Angela focuses on social justice and poverty eradication, seeking to change the unjust systems that cause and perpetuate poverty. She ensures that the rights of people at the grassroots are heard in decision making, global policy making and advocacy at the UN. The Mercy Foundation Board also recognises Angela’s contribution to and membership of the UN’s Working Group to End Homelessness.

We congratulate Angela on her achievement, her continued hard work over many years and her significant contribution to social justice in Australia and internationally.

On 23 September 2020, in a virtual ceremony, Sr Loreto Conroy RSM, leader of the Sisters of Mercy North Sydney, and Annabel Senior, Chair of the Mercy Foundation Board, presented Sr Angela with her award. 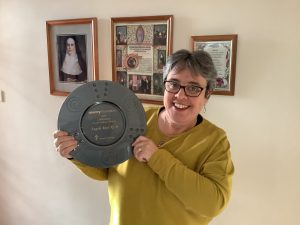