On Wednesday, 28th March, we attended an evening with Ambassador Luis deBaca, Dr Anne Gallagher AO, Professor Jennifer Burn from Anti-Slavery Australia and Mr Hamish Hansford, First Assistant Secretary, National Security and Law Enforcement, Department of Home Affairs. They spoke about the progress we have made as a nation and globally towards ending human trafficking and slavery and the challenges that are ahead.

Ambassador Luis deBaca reminded us that just a few days ago was the International Day of Remembrance of the Victims of the Transatlantic Slave Trade, where we remember the largest forced migration in history, and the most inhumane. The transatlantic slave trade lasted for over 400 years. Many millions of men and women were forced from their home and shipped across the Atlantic Ocean, where their freedoms were denied and they were treated barbarically and cruelly. The Ambassador reminded us that human trafficking and slavery happens everywhere and in our own homeland. He spoke about our own history of ‘blackbirding’, when thousands of Pacific Islanders were brought to Australia to work on plantations in Queensland and New South Wales, often by deception or force.

The Ambassador spoke about the need for robust laws to prosecute traffickers and the need to let people stay, which has implications for immigration status and policy. He emphasised the need to collaborate to bring about change.

Mr Hamish Hansford spoke about the policy changes that have helped combat human trafficking and slavery in Australia. He spoke about the upcoming federal Modern Slavery Act, which will be a landmark piece of legislation. He spoke about the inclusive process that has been undertaken to ensure the Act is as effective as possible. Hamish mentioned other pieces of legislation that were developed to address modern slavery in Australia, including the criminalisation of forced marriage in 2013 and the changes to the human trafficking visa framework.

Dr Anne Gallagher AO spoke about the unique environment in Australia, where there is a close relationship between civil society and government and urged both parties to nurture that relationship.

Anne reflected upon how far we have come – it is only in the last 60 or 70 years that trafficking was criminalised in Australia and internationally, and that there now exists a robust international framework and bodies to address human trafficking.

1.  Prosecution is working: Prosecution can not be said to be working. Last year, worldwide, there were only 9,000 human trafficking and slavery convictions of which 90% were sexual servitude or trafficking. This means that there were only around 1,000 convictions for all other types of trafficking including forced labour. When there is an estimated 25 million people trapped in forced labour across the globe (of which 4.8 million are in forced sexual exploitation), the prosecution process is clearly not working effectively.

2.  Focusing on Supply chains will combat human trafficking and slavery: Anne warned us that whilst it is important to address slavery in supply chains, it does have limitations. It is very difficult to investigate deep supply chains; most of the service economy will continue to be out of reach of any supply chain legislation and this legislation will only ever benefit people working in export industries, not domestic workers. She also warned that it deflects the time, energy and resources needed to address less glamorous tasks such as supporting victims.

3.  There is an easy solution to human trafficking: Human exploitation is not an aberration but continues to support the global economy and has done this for hundreds of years. It is a complex issue with no simple solutions. She discussed how the legal sector had taken on this issue to address through prosecution and laws to prevent and protect victims. Anne said that to end human trafficking, it will require all sectors of civil society, business and government to work towards this outcome. There is no silver bullet. 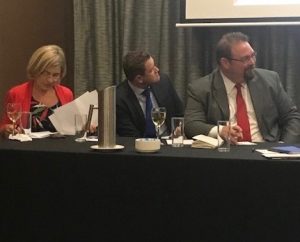 Stay Connected with us